In order to sort a collection of elements you need to provide a sorting predicate that determines when one element is less than the other. This predicate must “induce a strict total ordering on the equivalence classes” according to cppreference. Wait, what?

The upcoming C++ spaceship operator implements a three way comparison, i.e. it is a single function that can return the results of <, == and > combined. But related to it are terms like “strong equality” and “weak ordering” which are somewhat confusing if you don’t have the mathematical background.

So let’s untangle it: This series will explain both the mathematics behind equality and ordering, as well as give concrete guidelines for implementing the comparison operators and the spaceship operator.

This part covers the mathematics behind ordering relations. They are a lot more complicated than equivalence relations we’ve looked at before. As my blog posts are usually long anyway, I’ve decided to split it into two. So this part is only about the mathematics while the next part—already published—is about how they should be implemented in C++.

Consider any two elements a,b from a set A. They can have one of the following relationships:

As such the ideal comparison relation would be able to return the entire relationship between a and b at once. But if you remember the first part of the series, a binary relation is defined by listing all pairs that are in the relation. In other words: it can just give you a boolean result, either the pairs are in the relation or they aren’t.

Thus an ordering relation is defined in terms of a binary relation that will answer only one of those questions. The others are deduced based on that answer.

This can be confusing, so let’s be very careful when looking at them.

The most fundamental ordering relation for “less than or equal” is a preorder: It is a (very) generalized ≤.

What are the fundamental properties of ≤?

A preorder has only those two properties, which means it just barely qualifies to be an order.

This ↦ relation is a preorder: Every node is reachable from itself (A ↦ A) by simply staying where you are, thus it is reflexive. And if A ↦ B and B ↦ C then we can concatenate both paths and have a path from A to C, so A ↦ C meaning it is transitive as well.

But note that if we have a graph that is not connected, we can have two nodes A and B where neither A ↦ B nor B ↦ A, as there is simply no way to go from A to B in either direction!

So if you have a preorder, there is no guarantee that you can compare every element with every other elements, there are elements that are incomparable. If we don’t want want incomparable elements, we want a total relation: A binary relation R is total, if for every pair of elements a and b, a R b or b R a, or both.

For that reason preorders are often called ≲ because they are not < or = but < or ~. The equivalence relation defined by ↦ puts every element in a relationship that are reachable in both directions.

Question for the reader: is an equivalence relation total?

To summarize, given a preorder ≲, two elements can either be:

Note that there is no way to check for equality using a preorder.

What if we want to have an ordering relation where we can get true equality instead of some equivalence?

Then we need antisymmetry: A binary relation R is antisymmetric if a R b and b R a is both true, then also a = b (and vice-versa).

When we have a preorder that is antisymmetric we have a partial order: A binary relation that is reflexive, transitive and antisymmetric. Now we can truly use the symbol ≤ because it really means “less than or equal”.

The “is reachable from” relation ↦ was a preorder. But it is not a partial order: we can have A ↦ B and B ↦ A for A ≠ B (they just need to be part of the same cycle).

Note that the ⊆ operator looks a lot like ≤!

If we have a partial order without incomparable elements, it is called a total order. This is a binary relation that is reflexive, transitive, antisymmetric and total.

To summarize, given a partial order ≤, two elements can either be:

Note that the only difference to a preorder is the equality instead of the equivalence.

Why is it not called a “strict preorder”?

And now consider what happens if we extend the < order to a ≤ by adding all (a, a) pairs to the set. If a ≤ b and b ≤ a is true, then the asymmetry means that a = b. This means the extension of an irreflexive and transitive binary relation is a partial order. And if we start with a partial order and remove all (a, a) pairs, we end up with an irreflexive and transitive binary relation.

So an irreflexive and transitive binary relation is called a strict partial order.

And yet again, if we have a strict partial order that is total, we call it a strict total order.

But wait: we said a binary relation is total if either a < b or b < a for all a and b. But the asymmetry means that a < a is never true, so it can’t be total!

So a strict total order isn’t actually total. Instead we have what’s called trichotomy: for every two elements a, b, either a < b or b < a or a = b (but only exactly one of those is true at the same time).

For a strict partial order if we have neither a < b nor b < a then either the elements are equal or they are incomparable. For a strict total order it means they are equal.

Only for a strict total order can we deduce that two elements are actually equal.

Let’s look at the set of colors from the previous post again: C := {yellow, red, green, blue, cyan, magenta}. We can define a strict partial (and in this case, total) order “is uglier than” by arranging them in the following order: magenta < cyan < green < red < blue < yellow. We say that a color is < than another color if it is listed in this list first.

And yes, this is the only way to define that “is uglier than” relation. Every other order is wrong.

Last time we did my equivalence relation of colors, where cyan is just an ugly blue. The corresponding total preorder in terms of ≲ is easy to write: magenta ≲ green ≲ red ≲ blue ≲ yellow as well cyan ≲ blue and blue ≲ cyan. Now cyan and blue are considered equivalent.

We can define a strict order based on that very easily: If a < b is false, then a must be greater than b equivalent to b. In other words a < b is false if b ≲ a, and true otherwise. This is the complement of the total preorder.

In this case we get the following strict order: magenta < green < red < blue/cyan < yellow and neither cyan < blue nor blue < cyan. This is a strict partial order as it is irreflexive and transitive, but it is not a strict total order as we don’t have trichotomy but only a weaker version of it: Either a < b or b < a or a and b are equivalent.

And this property is precisely what allows us to define an equivalence relation ~, where a ~ b if a and b are incomparable. Let’s check the required properties:

So for our colors, C/~ based on my cyan is blue equivalence would be {yellow, red, green, blue, magenta} (because cyan is blue). And on this set we have a total order because either a < b or b < a or a = b (which really means equivalent, but we’ve cheated by modifying the set).

To summarize, for a strict weak order, two elements can either be:

Okay, this was a lot of terminology. So here’s a graph that summarizes the ordering relations and how you can transform one into the other: 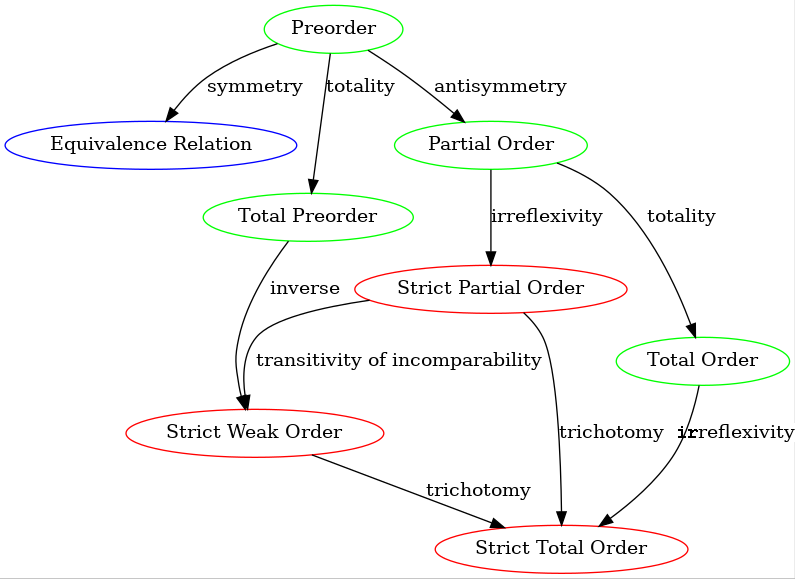 And this table tells you what you actually want: Given two elements a and b and some ordering relations, is a less than b, greater than, equivalent/equal or incomparable? For brevity, greater than is left out (just swap a and b) and equivalent and equal are merged. But you know that a partial order, total order and strict total order define true equality.

Note that a strict partial order is pretty useless because we can never know whether two elements are equal or just incomparable. And we can simplify the ordering relations even further based on two dimensions:

Again, a strict partial order is useless, so I’ve left it out.

Why are there two options in the total column?

It is just the question between a < and a ≤ relation, both are equally good. And a quick spoiler from the future part about sorting and searching: In order to, e.g. quick sort, a sequence you need a total order, but equivalence is good enough. So you can either pass it a total preorder, or a strict weak order, depending on your taste. The C++ standard library decided to base everything around a total, equivalency <, i.e. a strict weak order. But it could have just used a total preorder as well. Then the default would not be std::less but std::less_equal.

If you've liked this blog post, consider donating or otherwise supporting me.

This blog post was written for my old blog design and ported over. If there are any issues, please let me know.